Jim Lamb wrote a post about how to use a custom activity to match the compiled versions of your assemblies to the TFS build number. This was not a trivial exercise (since you have to edit the workflow itself) but is the best solution for this sort of operation. Interestingly the post was written in November 2009 and updated for TFS 2010 RTM in February 2010.

I finally got a chance to play with a VM that’s got TFS 2013 Preview installed. I was looking at the changes to the build engine. The Product Team have simplified the default template (they’ve collapsed a lot of granular activities into 5 or 6 larger activities). In fact, if you use the default build template, you won’t even see it (it’s not in the BuildProcessTemplates folder – you have to download it if you want to customize it).

The good news is that the team have added pre- and post-build and pre- and post-test script hooks into the default workflow. I instantly realised this could be used to solve the assembly-version-matches-build-number problem in a much easier manner.

The solution is to use a PowerShell script that can replace the version in the AssemblyInfo files before compiling with the version number in the build. Here’s the procedure:

If you’re using TFVC, the files are marked read-only when the build agent does a Get Latest, so I had to remove the read-only bit as well. The other trick was getting the source path and the build number – but you can use environment variables when executing any of the pre- or post- scripts (as detailed here).

Save this script as “UpdateVersion.ps1” and put it into Source Control (I use a folder called $/Project/BuildProcessTemplates/CommonScripts to house all the scripts like this one for my Team Project).

The open your build and specify the source control path to the pre-build script (leave the arguments empty, since they’re all defaulted) and add a version number to your build number format. Don’t forget to add the script’s containing folder as a folder mapping in the Source Settings tab of your build.

Now you can run your build, and your assembly (and exe) versions will match the build number: 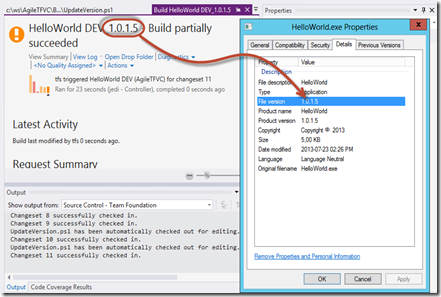 I’ve tested this script using TFVC as well as a TF Git repository, and both work perfectly.

What a wonderfully elegant solution to what has always been a pain in the neck. Thank you very much for sharing.
No problem! Thanks for the feedback. Don't forget to get the latest version of the PS script (with error handling) here: www.colinsalmcorner.com/.../...s-runscript-in.html
This looks like a great approach.

I'm using the hosted TFS Service and I've setup an Azure Continuous Deployment build. This uses the AzureContinuousDeployment.11.xaml build process. This template does not seem to have the pre-build script path parameter. Neither does the DefaultTemplate.11.1.xaml. I can see it if I select TfvcTemplate.12.xaml, however, then I lose my azure publishing.

Do you know of a way to add this parameter to other build processes?

You'll have to open the template (make a copy first) and insert a "RunScript" activity from the toolbox just before the "Build" activity. Then you create arguments on the workflow for the script path and script arguments, and wire those to the properties of the RunScript activity. Check this back into Source Control and set the script path and you should be good to go.

You can read my post www.colinsalmcorner.com/.../...fs-2012-builds.html about how to do this in a 2012 build template (although in 2012 you don't have the RunScript activity, so the 2013 modifications are much simpler).

Hi Colin,
Am doing similar thing in TFS Git repository. I kept build templates and build related scripts in one project and my main project is different.
My Source Settings has repo as project I want to build. In pre-build script path how can I give path to build scripts in another project.
Both projects are in defaultcollection on TFS.
Might be something trivial :-| but not getting it.

Thanks and Regards
Neha
@Neha

You'll have to commit the build scripts into each Git repo, since they don't "know" about each other if they're in different team projects, and the source settings only allow you to clone one repo (if I remember correctly). If you can map multiple repos, then just clone the "build script" repo with your "source" repo.
Thanks! It's a clean and easy solution for TFS.
Hey Colin,

What about need to check out and check in assembly.cs files to change the number?

Do you do it in this powershell?
We are using the SharedAssemblyInfo Powershell script (gist.github.com/RichardSlater/ce86d5cf5b645a5b068a) to ensure all assembly versions are the same across a VS solution.

How can we use the shared assembly info number as the build number?

I believe in your example, you're doing the opposite -- assigning a build number and then inserting into AssemblyInfo.cs file at compile-time.

Thank you
@Andreia - I never check out/check in the assembly info files. The substitution works on each build, and each build is labelled, so I can tie the executable to the build and the build to the source used for that build. Therefore, there's no reason to check out / check in the modification.
@Matt - the SharedAssemblyInfo script looks complicated. What we've done on some of our internal projects is remove the [assembly: AssemblyVersion("1.0.0.0")] and [assembly: AssemblyFileVersion("1.0.0.0")]" attributes from each AssemblyInfo.cs file in all the projects in a solution. We then add a solution-level file, SharedAssembly.cs and add it "as a link" to all the projects. Then our build script replaces the version numbers in this 1 file, and all the projects reference it, making all the projects end up with the common (build-generated) version number.

Of course you could still use the SharedAssemblyInfo script - I would just change it to take $env.TF_Build_BuildNumber as the version number. Then you can execute it pre-build and you'd be done!
Is there a way how i can get a Build Source Version instead of Build Number Version into my AssemblyVersion?
@Michal - you can override the buildNumber param and pass in $(build.commitId) which will be the Git commit (for Git repos) or the checkin ID (for TFVC repos) if I remember correctly.
Perfect little script; exactly what I needed for VS2015 builds we are migrating to.
Thank you!
Hi @Heidi