TeamBuild in TFS 2010 is an incredibly powerful engine – it’s based on Windows Workflow 4 (WF4). Once you get over the initial learning curve of WF4, you can get your team builds to do some impressive stuff.

One common scenario is supporting a ClickOnce deployment from a build. Essentially, you need to add an MSBuild activity into your build, tweaking the command line parameters that are passed to MSBuild. That’s not too difficult in and of itself – but I wanted to go further and tie the ClickOnce version into the build version.

To do that, I used a custom build activity from Jim Lamb’s post on versioning assemblies. However, I had to tweak the “UpdateVersionInfo” activity to accept 2 regex patterns instead of Jim’s 1. Jim uses the regex pattern to extract version info from the build number (so if your build is ‘MyBuild_4.0.0.2’ he extracts 4.0.0.2). He uses the same pattern to find/replace in the AssemblyInfo.* files (or whatever files you specify). Usually this is fine.

However, the assembly version in the project file for a ClickOnce app can have a different format – if you select “increment revision whenever I deploy” in the Publish properties of a ClickOnce project, the version places a * in the revision number – making the version 1.0.0.* (or if you look in the project file, 1.0.0.%2a). So I needed to separate the “source” regex pattern (the pattern used to extract the version from the build number) and the “target” regex – the pattern used for the search/replace in the target files.

I opened the UpdateVersionInfo.xaml and added a new argument (called “SourceRegeEx”). I then changed the “Extract Version Info” assignment activity to use SourceRegex instead of Regex.

I stared from the DefaultTemplate.xaml added a number of arguments (I also updated the metadata to make the arguments prettier when you create builds): 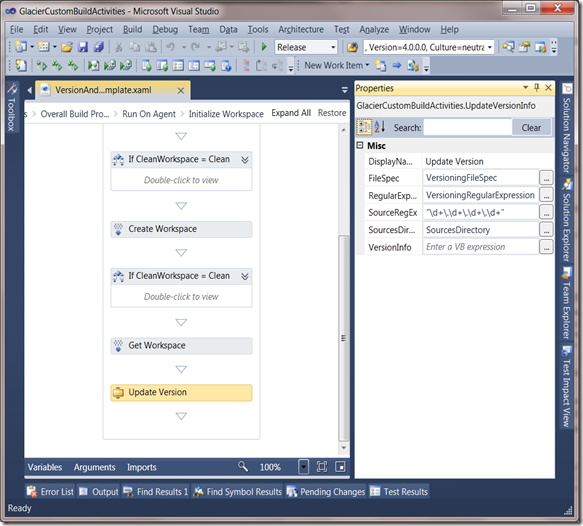 The next step was the ClickOnce versioning customizations. I located the step “If TestStatus = Unknown” in the “Try Compile and Test” sequence. Right after that activity I added a sequence activity called “ClickOnce Deployment”. 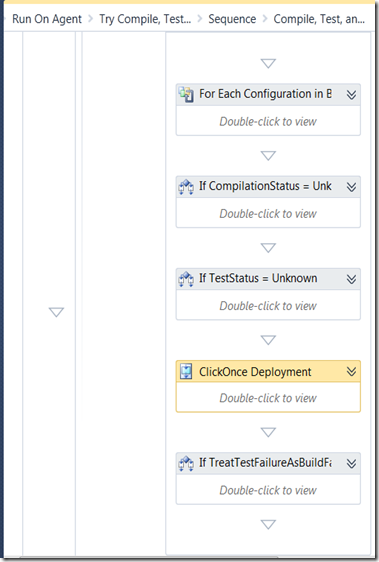 Here is the sequence and explanation: 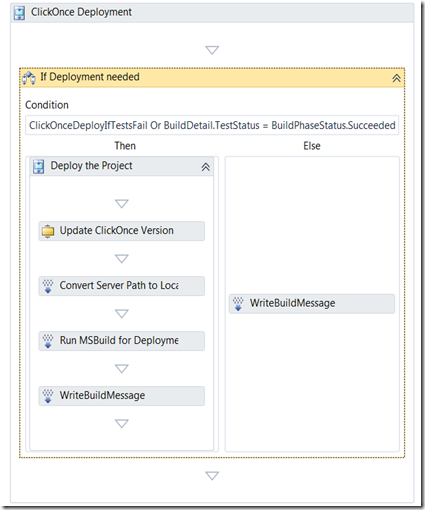 Now you need to compile the custom activity project and put the dll into source control for your controller to find (again refer to Jim’s blog post).

Finally, you can set up a build: 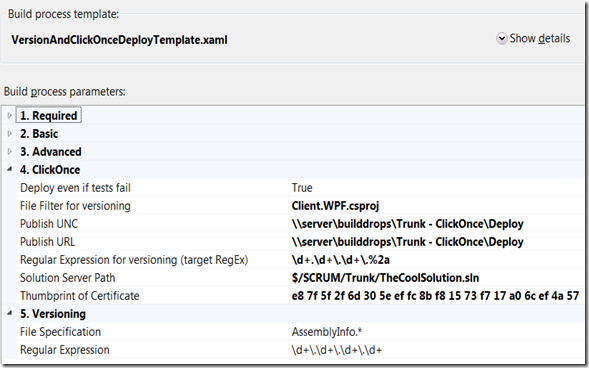 NOTE: If you have different configurations (for Production and Staging for example) use Vishal Joshi’s blog to enable config transforms on your app.config file – then target the config you want in the build.

Download the project (including the DefaultClickOnce.xaml template – see the test project’s Templates folder) from my skydrive.

Hi Colin,
I have created a build template as above but unfortunatly this is failing with the error "Cannot find the certificate that matches the project system thumbprint."

When connecting to the build server, and running the same MSBuild arguments that TeamBuild is running, the publish works fine. I have also tried changing the build agent to run using my account but get the same error.

I'm unable to build using VS on the build server as we do not have it installed.

I can't see how this can be a problem with the certificate if I am able to resign the manifest by calling MSBuild directly.

Could you help?
Hi justjont

You'll have to install the certificate that you use on your local machine on the build server. I recommend that you generate a test certificate in VS (or use one that you've purchased). Install the cert into your store on your machine, and configure the ClickOnce project to look for the cert in the store (rather than looking for a file). Then export the cert from the cert store and import it onto the cert store of the build server. The thumbprint is then the thumbprint of the cert on both machines (since it's the same cert). That should clear up your issues!
Colin Dembovsky is a Cloud Solution Architect, DevOpsologist and ALM MVP working at 10th Magnitude based in Vacaville, CA (formerly South Africa). more...
teambuild Testing source control docker DevOps Release Management development tfs config Cloud ALM AppInsights TFS API news Lab Management
Tweets by @colindembovsky